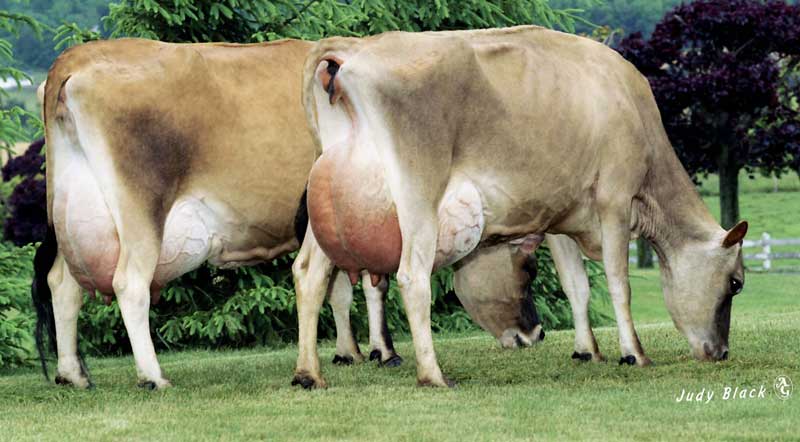 Huffard Dairy Farms has been in the family for more than 200 years. Jerseys were brought to the 400-acre farm in 1929 by James Schultz Huffard Sr., who began breeding Registered Jerseys using the Schultz prefix.

Though the Huffards milked other breeds as well in the formative years, Jerseys soon earned their place as the breed-of-choice because of their overall net profitability.

Jim and James Huffard Jr. admiring their stock in 1976

The breeding philosophy of "production-pure genetics" has been paramount from the beginning, as the Huffards purchased bulls from high-production herds early on and then used leading bulls when A.I. became available.

Today, the 600-acre farm is owned and operated by grandsons, James "Jim" S. Huffard III and John Huffard, and Jim's son, Trey. Registered Jersey genetics from Huffard Dairy Farms can be found on farms across the globe through females consigned to elite sales in this country and domestic and international semen sales.

The Huffards milk 350 cows twice a day and also raise about 400 heifers on the farm in Crockett, VA. All milking cows are housed as one group and fed a total mixed ration consisting of corn silage, alfalfa haylage, high moisture corn and grains. The grain mix consists of soybean meal, distillers grains and other concentrate, commodity and by-pass sources.

Huffard Dairy Farms uses the AFIFarm system for herd management, adding new flow meters and displays to each stall in 2015. 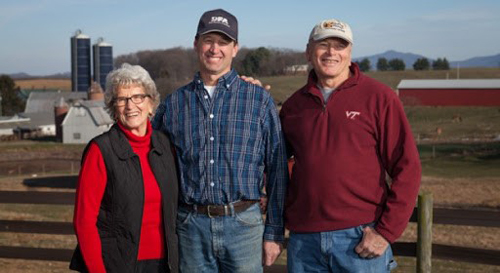 Animals in the Fairway Jerseys herd, a partnership with Dr. Joe Lineweaver, are housed at the farm as well.

Huffard Dairy Farms is enrolled on REAP, the American Jersey Cattle Association's (AJCA) flagship performance program, and a long-time contributor to Project Equity, marking 30 years of continuous contributions to the program in 2010.

The dairy was a virtual farm tour for World Dairy Expo in 2007.

In keeping with their belief in their product, the Huffards joined forces with fellow Jersey breeder, Joey Blankenship, to bottle milk from the herd at Duchess Dairy in Rural Retreat, VA. Duchess Dairy began bottling milk in January 2010 and now produces several varieties of milk, cream and butter. Products can be found in retail outlets across the Southeast. 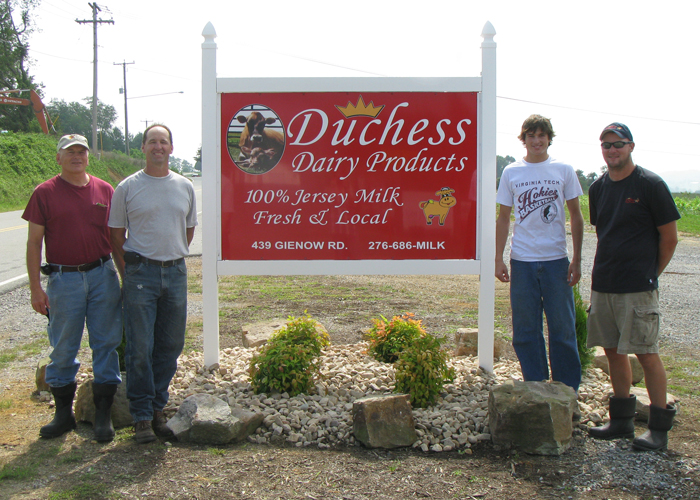 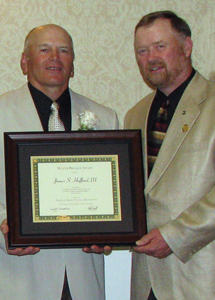 Jim has received two of the dairy industry's most prestigious cattle breeding awards - the AJCA Master Breeder Award in 2008 and National Dairy Shrine's Distinguished Cattle Breeder in 2012. He has served the Jersey breed as president and director of the AJCA and been a director for National All-Jersey Inc. as well, currently serving as the organization's vice president. Jim also is a part of the AJCA Investment Advisory Committe, AJCC Research Committee and is the technical advisor to the Type Advisory Committee.